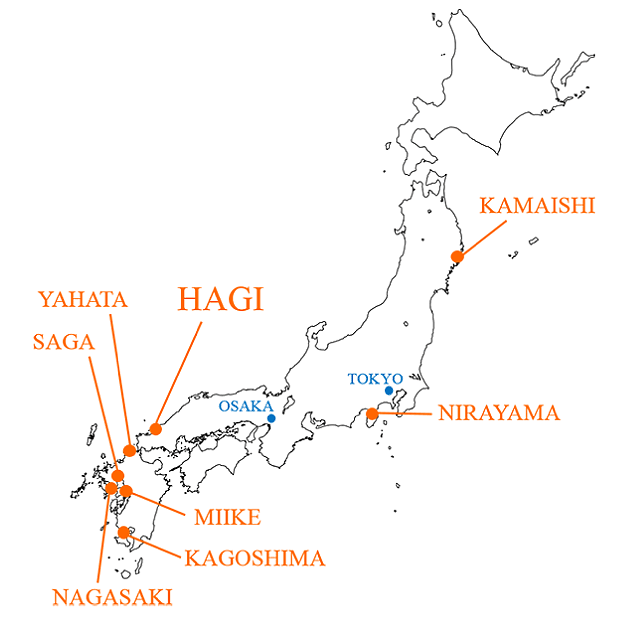 This serial nomination encompasses 23 sites across 8 prefectures and 11 cities, located mainly in Yamaguchi Prefecture and Kyūshū. In the Hagi area, there are five proto-industrial heritage sites based on imported technical expertise.

Serial nomination provides for sites dispersed across a wide geographical area to be considered together as a historical or cultural group. This allows disparate sites with universal value to be nominated from all across Japan.

The Hagi Domain made efforts to introduce the reverberatory furnace, a smelting furnace necessary for casting iron cannons, as part of the reinforcement of coastal defenses. The ruins remaining today include only the chimney portion, with a height of 10.5m, built mostly of andesite. As we can confirm that the reverberatory furnace operated temporarily in 1856 from the record of the Hagi Domain, the Hagi Reverberatory Furnace is thought to have been constructed as a test.
The ruins surviving today, which exist only in Nirayama (Shizuoka Pref.) and Hagi, are highly precious in the history of industrial technology in Japan.

In 1853, the Tokugawa Shogunate lifted a ban on the building of large ships in order to reinforce its armaments and the coastal defense of each domain, and subsequently, the Hagi Domain was also requested to build large ships. In 1856, Ozaki Koemon, a master shipwright of the domain, and others decided to construct the shipyard at Ebisugahana in Obataura. In December of the same year, the first Western-style warship the “Heishin Maru” was launched, and in 1860, the “Kōshin Maru” was launched. It was confirmed that in building the “Heishin Maru,” iron mined at the Ohitayama Tatara Iron Works was used. Even now the big breakwater still remains unchanged in scale from the Edo period.

The remains of an iron works which produced iron by melting the raw material ironsand, with the heat produced by burning charcoal. In a traditional Japanese method of making iron, a bellows was used to feed air to the ironsand and charcoal in the furnace. This method of ironmaking is known as “tatara”. Ohitayama Tatara Iron Works operated three times; from 1751 to 1764, 1812 to 1822 and 1855 to 1867.

During the early stage of the introduction of industrial technology, technologies were characteristically developed within local communities under the guidance of the feudal clans which governed each domain. Mōri Terumoto who lost in the battle of Sekigahara in 1600 constructed Hagi Castle, and Hagi Castle Town was also systematically constructed. The districts where samurai and merchants lived was strictly divided, and Hagi prospered as the center of politics, administration and economy of the Hagi Domain for the next 260 years.

Shoukasonjuku Academy was a private school headed by Yoshida Shōin, a scholar of military science of the Hagi Domain. It is a small one-story wooden house of 50㎡ with a tiled roof, divided into a lecture room of 8 mats (13.2㎡) and a waiting room of 10.5 mats (16.5㎡). He started giving lectures to his students in 1856, then moved to the extant schoolhouse in 1857. Takasugi Shinsaku and Itō Hirobumi were also students of this academy, and many talented graduates who played important roles in the industrialization of Japan studied at this academy.